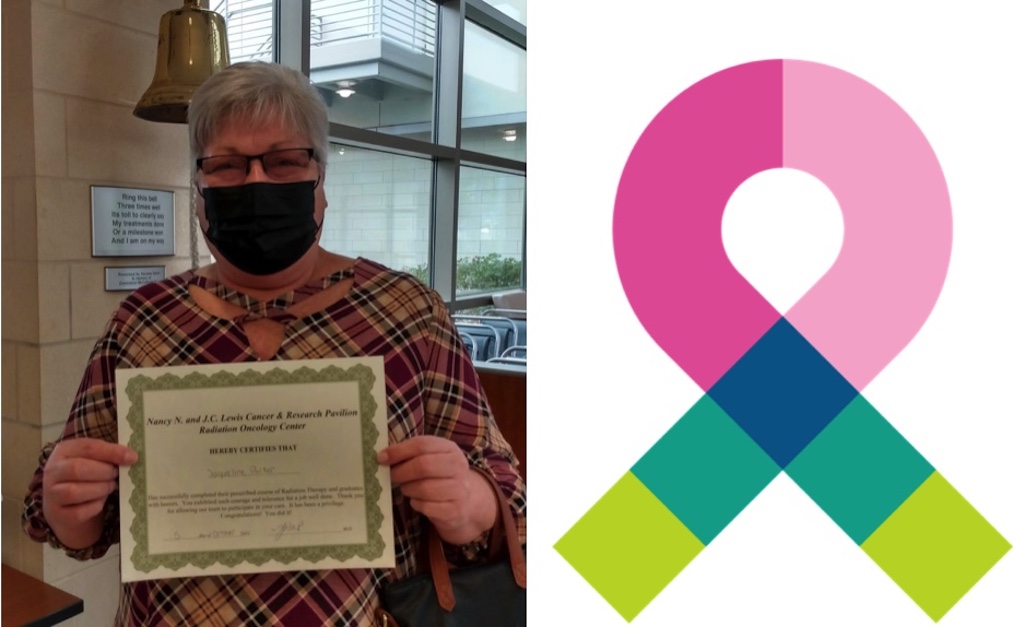 Due to her condition, Parker sees her primary care physician, Dr. Rebecca Sellers, every three months. In fall of 2020, Dr. Sellers noticed a lump in her patient’s breast. The doctor immediately suggested Parker schedule a mammogram.

“If it weren’t for Dr. Sellers, I would have never known there was an issue,” Parker says. “I’m guilty for not checking like I should, but she did and found something.”

Although Parker’s 2019 mammogram had been normal, her October 2020 mammogram showed an abnormal asymmetry and concern for breast cancer.

“This highlights the importance of having your annual physical with your primary care physician to ensure all previous cancer screenings are addressed and discussed,” says Dr. Sellers. “We were able to get her into the imaging center at SouthCoast Health quickly for a breast ultrasound and subsequent biopsy.”

Parker’s pathology results following her breast biopsy revealed the unfortunate diagnosis of breast cancer. The reality, she says, was difficult to face.

“I couldn’t believe it,” Parker explains. “It was shocking. I thought, ‘Cancer? Me?’ It was a very emotional experience.”

She was immediately referred to Dr. Christa Jillard-Ilić for an evaluation. Dr. Jillard-Ilić, who runs the High-Risk Breast Cancer Clinic at SouthCoast Health, explained the cancer was Stage I and was caught at an earlier, treatable stage.

Parker has a substantial family history of breast cancer, including a mother, an aunt, a grandmother, and even an uncle. Dr. Jillard-Ilić told Parker it was important to have her meet with a genetic counselor for testing.

“When treating breast cancer patients, it is imperative that familial and genetic factors are considered,” explained Dr. Jillard-Ilić. “This helps determine the best surgical plan once a cancer diagnosis is established. Each patient deserves, and receives, an individualized treatment plan at SouthCoast Health.”

Parker’s suggested plan included a lumpectomy. She opted for this approach and enlisted Dr. Jillard-Ilić as her surgeon.

“Dr. Jillard-Ilić was just wonderful,” Parker says. “She explained every detail and what she had to do. She told me she was going to do whatever it took. I couldn’t have asked for anyone better.”

A series of 20 radiation treatments followed. Although Parker says it was physically challenging at times, she was willing to do whatever it took to overcome the disease.

“I am happy to see that she has received her certificate of completion for radiation treatments,” says Dr. Sellers, “and now joins the rank of many women as a breast cancer survivor.“

Today Parker’s cancer remains in remission. However, she continues to be diligent, keeping up with follow-up appointments. When it comes to breast cancer screenings, Parker strongly suggests other women do the same.

“Make sure and get checked as often as you should,” Parker says. “Never think that everything is OK, because you never know.”